I can't believe he said that.

We all know our mayor has a distorted view of reality, he seems to have brought Police Chief Warren Riley under control of his Reality Distortion Field. According to the Times Picayune;

Riley repeatedly criticized the study as being a money-maker for CQ Press, which examined statistics for six major types of crime in nearly 400 cities and found that, with more than 19,000 incidents of crime last year, New Orleans ranked number one, ahead of Camden, New Jersey, and Detroit, Mich.

"In the 1870s, New Orleans was considered one of the most violent cities in the country," Riley said. "Is it the water in the Mississippi? I don't know what it is...We know right now that crime is down in this city."

I wonder if the 1870 quote is correct. I wonder if he meant 1970 or if it was a misquote. If it is right Riley has reached a new apogee in historical unconsciousness and comparing apples and mangos. For the record New Orleans had a population of 191,418 in 1870, about 50% lower than it is now. I don't think the FBI was gathering crime statistics back then.

It's interesting to look at how our former Chief responded to a similar report on Atlanta in 2004. According to an L. A. times report;

Chief Richard Pennington, releasing an audit of police practices Friday, warned that Atlanta is the most dangerous city in America and criticized his department for routinely underreporting crime.

Pennington said he was shocked to find that Atlanta residents consider traffic a more serious problem than crime.

In addition, according to the report, police work is often shoddy. One Atlanta resident interviewed said she once placed 14 calls to the 911 system to report a burglary and that it took police 68 minutes to arrive.

The denial of the current administration is so obvious and predictable the the authors of the CQ Press "City Crime Rankings" issues a separate Note on New Orleans. It addresses indirectly the population shell game Nagin and Riley have ben playing.

Because of the year-to-year differences in New Orleans’s population, City Crime
Rankings reports the city’s crime numbers and rates for 2007 but does not compare those rates to 2006 or 2003. Finally, it should be noted that New Orleans would have the highest city crime comparison score even if the 2007 Census Bureau population estimates were the basis for the scoring.

I'm sure Nagin has some super secret numbers from Greg Rigmar, indicating that crime in New Orleans is in fact lower than it has been at any time in the past, especially 1870.

What is more troubling than the numbers is the apparent lack of concern on the part of the Chief.
He apparently thinks all that is needed a little adjustment.

Riley said that NOPD will "assist the judge with additional investigators" and will "tweak a little bit and just move forward" when it comes to any problems with bringing cases from arrest to conviction.

"The problem in the past is keeping them in jail," said Riley. "Identifying them and capturing them isn't the problem."

Chief, we need more than a little "tweaking".

How can he be so clueless? If he has no idea how to address the crime problem perhaps he should step aside and make room for someone who does have some ideas. Clearly more of the same isn't working.
Posted by mominem at 11/29/2008 07:42:00 PM No comments:

We was Played by Ray - Again

I watched the infamous Garbage Hearings from end to end on Cox 11/17/08.

It was interesting. The news reports only scratched the surface of the weirdness that happened.

The hearing started calm enough. Veronica White made the obligatory Power Point presentation covering her department and budget. The Budget Committee listened, probably bored and waiting for the chance to ask questions.

Her presentation was followed by a fairly professional presentation by the consultant hired for $250,000 to determine how much the garbage contractors should be paid. They are apparently building a database of every household in the city of New Orleans, using tax records, voter records, utility billing Sewerage and Water Board billing and other data. It seems like serious overkill. One of the major Sub-Consultants is GCR, Greg Rigamer's company.

There were few questions. Apparently everyone was warming up for the Main Event.

After the presentation Veronica White took the mike again. She was immediately asked about news reports that Jefferson Parish was paying far less for garbage pick up than Orleans Parish. White almost giddily exclaimed "I have that". She pulled out a piece of paper and passed copies around. She presented her analysis of the differences as a series of bullet points.

Here are the ones I remember;
There were a a lot of other things which were included in the list, but almost all of them applied only to the French Quarter and CBD (the area serviced by SDT) , for which we pay a substantial premium over Metro and Richards.

This is where it started getting weird. As Veronica White read the list she became increasingly animated, louder and the pitch of her voice rose. Almost as if she were delivering a summation or was becoming more and more stressed by the presentation, or the confrontation she expected. It was very odd.

If it shows up on Cox again watch the whole thing it's very enlightening.

When she finished her recitation Jackie Clarkson began working through the detail to try to make sense of it. As Clarkson tried to point out that many of the costs applied only to the CBD and French Quarter, White kept referring to the total budget and how they couldn't be compared. They were talking past each other and White was becoming more emphatic.

There was a discussion of why we should pay to have semi automated pickup, when Jefferson gets manual pickup so much cheaper. Garbage Guru Veronica White said she could go on and on about the advantages ot the city, but only really came up with a few items including fewer complaints and better sanitation. Jackie Clarkson disputed that and attributed the reduction of complaints to the new city supplied cans.

Next up was an exchange not usually shown on TV. Stacy Head quoted the contract and asked why we weren't getting the lists required by the contract. Veronica White insisted that the contract was being followed. White was becoming progressively more and more animated. Then Veronica White dropped the bombshell. She announced the City had got a list every month and could send them to Stacy Head to prove it. There was a shot of Stacy Head's reaction, her jaw dropped, she was speechless, for a few moments.

Then there is the part we've all heard.

Next there was a break between rounds.

One of the striking things about White's performance was her disjointed use of language. Clakeson and Head, the two active questioners obviously had trouble following her. She jumped for phrase to phrase, barely connecting a thought or finishing a sentence.

After the break Jackie Clarkson said the Department Head out of order. Jackie Clarkson reiterated the need for apology. She also confirmed that the Council had asked for the garbage information repeatedly.

Mr. Cary Grant danced around Stacy Head's questions for a while, including reference to meeting minutes from April 2008 where White had said no system is in place. The Council was given binders in paper form as the only record available.

The oddest thing (besides Veronica White) was two rows of guys in orange jump suites. I wonder who paid for them to be there and who queued the applause.
Posted by mominem at 11/17/2008 07:18:00 PM No comments: 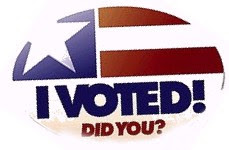 I voted this morning did you?

In spite of all of the dire warnings of long lines, faulty machines and my vote went very quickly and smoothly.

Our polling place in back in a garage where God intended it to be for the first time since Katrina. After Katrina our precinct was moved into the Greek Church on Bayou St. John. I was told that the church didn't want to "host" voting anymore. I never liked voting there anyway, it was too crowded and the parking lot was too small.

Voting in a person's home seems to be something of a Louisiana thing. I know when my parents moved here they had never heard of such a thing. In their experience voting was always at some government building, a school, fire station or the like.

I like to opportunity to see a few of my neighbors and cast my vote. I like the opportunity to check on how its going and hear firsthand what the turnout is. I would have volunteered my garage, except we have a carport and couldn't deal with security for the voting machines or inclement weather.
Posted by mominem at 11/04/2008 09:30:00 AM No comments: