Recently we observed the fourth anniversary of the Flood of New Orleans and Katrina's devastation of South Louisiana and the Mississippi Gulf Coast. A lot is still left to be done. 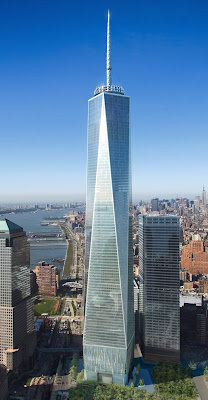 Freedom Tower
Today is the eighth anniversary of the attacks on the World Trade Center on September 11, 2001.

The Freedom Tower construction is continuing yesterday;
1 World Trade Center (formerly the Freedom Tower) is the center piece of the redevelopment of Ground Zero. It will include 2.6 million square feet of office space, retail space and a subway station. Scheduled for completion in by the end of 2013 work on the tower began April 27, 2006.
Posted by mominem at 9/11/2009 03:11:00 PM No comments:

I always thought that 6σ was derived from the math for 6 Standard Deviations on a Normal Distribution. That works out to 1 in 506,800,000.