What the matter with some people?

We are trying to buy some Real Estate, in this market you would think that Real Estate people would be all over any credible purchaser, yet getting some people to call back is very difficult.

We looked at one property and after several attempts the listing broker never called back. The Owner (a bank) is having trouble selling it, I wonder if the broker is part of the problem?

On another property I got the name of the person handling it. She didn't call back. I called again and spoke to the person. I called to set up an appointment for my wife. The person handling it would not be available when she was so we arranged for her to meet another person. She showed up in the rain for her appointment, called the guy who was supposed to meet her. He had either forgotten or blown the meeting off. When I called the office back to set up a meeting for myself, the original broker said, oh, he tried to contact you (not accurate) and I'm not handling it any more, he is. I called him, he said my wife was supposed to call and reschedule, that's sorta true, she didn't want to wait for him in the rain after he forgot the meeting. I asked if we could meet Wednesday or Thursday morning. I was thinking about 8:30 AM, he couldn't get there that soon. I decided We weren't that interested.
Posted by mominem at 3/15/2010 03:36:00 PM No comments:

New Orleans needs to Institutionalize reforms to prevent a relapse. Simply electing good people to a bad system is not enough. It might actually appear that the system is working.

Mexico has an Institutional Revolutionary Party originally formed to preserve and extend the ideals of the Mexican Revolution. It hasn't worked out that well. Eventually the party became fat, happy, arrogant and corrupt. Eventually they lost.

The NOPD is much in the news. The Chief is under fire and he may have pulled off an amazing feat of public relations. He may actually be less popular than the Mayor. 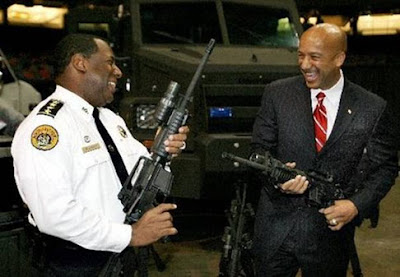 People are looking back on Chief Pennington as some kind of golden age. Under Pennington, one-third of the corrupt or under-performing NOPD was replaced, firing people who can't pass truly independent investigations of complaints, random integrity checks, and professional standards.

But before firing everybody "who can't pass truly independent investigations of complaints, random integrity checks, and professional standards" You have to have a chain of command committed to those standards and the ability to conduct truly independent investigations of complaints, credible integrity checks and well communicated professional standards.

It seems to me you can't fire the entire police force all at once unless the Governor is willing to mobilize the National Guard for several years until a new force can be built. Maybe Obama could invade New Orleans and start over like Bush did in Iraq. Short of that you are necessarily going to rebuild the force with some of the same people. Progressive improvement and attrition will eventually replace all of the current officers. Pennington made a lot of improvements, had his successors built on that instead of dismantling what he did we would be much better off today. The long term key is a long term effort.

Mitch has started a national search for a new ploice chief as the first step. We need to Institutionalize these reforms so that the next Ray Nagin can't undo them. Every Police Chief needs to be selected with the same kind of process we routinely use for Superintendent of Schools, Aviation Director and Inspector General. It's too important to be left to the Mayor's crony. There is much more to do but it is an imperative first step to permanently solve the problem long term. The NOPD made a lot of progress under Pennington, but he didn't finish the job and quickly reverted as soon as he left town.

One way to help stop the reversion would be more effective power sharing between the City Council and the Mayor. As we have watched Nagin push the limits of Mayoral power and arrogance there was no effective counter weigh in city government. Often the Council was literally powerless to do anything. Pushing the decision out in the public (like the Inspector General selection for example) would insure at least some public scrutiny and a public record. While University Presidents may not be the ideal group, the prescribed process forces it to be more public. Adding some of this to the Charter would help. There is always danger that some faction will gain enough control to subvert the process.

I worry very much that Mitch will do a good job as Mayor but won't make the structural changes needed to prevent a recurrence of the problems we face.

I am concerned that he won't embrace radical change, but not because he wants to use the existing power. I just don't think he is an innovator. I think he will be competent but not bold.
I'm not sure Mitch was running for power as much as validation or personal and family legacy.

However if he is concerned about his legacy then he might want embrace historic change, like his father did by embracing integration.
Posted by mominem at 3/03/2010 09:04:00 PM 1 comment: