I was going to try to do some analysis of the appeals from the New Orleans Tax Appeal Web Site, but its shut down. Too soon I think, especially if there was any inkling of the appeal of the appeals.

I found a City Business Article which confirms that,

Most appeals came from the Third and Sixth districts with 2,100 and 1,600, respectively.

The officers agreed with about 40 percent of the assessed residential appraisals and will recommend the other 60 percent be adjusted, primarily decreased.

City Business also reports the number of appeals reported (6,000) was actually ended up at 5300 and that 3478 properties were adjusted. The assessors filed 1530 appeals or 44% of all assessments that were changed. There may be some discrepancies in these numbers since other reports list the number of appeals differently.

The paper added this summary. 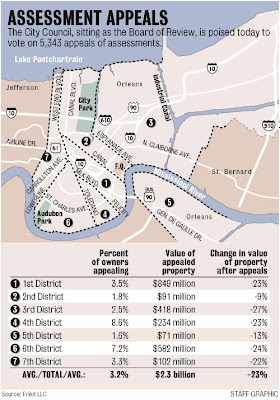 These numbers aren't consistent with other reporting.

Back at home in my district, the Third accounted for 35% of the total appeals 61% were granted, including mine, for an estimated 1250 appeals granted. Mr. Williams is appealing 771 or 60% of the number granted. He filed appropriately half of all the appeals.

However this is a very speculative exercise, and any errors may be compounded. Numbers for different sources don't match.

According to Kerry Miller of Friloux, the City Councils Contractor,

"There's about 160,000 total properties in Orleans, and the Third District is the largest with about 75,000 properties,"

That works out to less than 4% of the people city wide appealed and slightly more than 2% received any relief. In the Third District the number of appeals was less than 3%. The Sixth District with only 17,000 properties had almost 10 % of the assessments appealed.

This whole process was difficult, complex and on a tight time table mandated by statute.
This time line poses significant challenges to everyone involved. I've been involved in every step of the process and from what I saw the Assessors generally failed to meet the challenges.

The difficulty of doing anything in New Orleans post-Katrina/federal flood, has multiplied. Anything to to with Real Estate has gotten exponentially more complex.

Each Assessor seems to have selectively decided on a different way to respond.
Stacy Head informed her constituents on her web site.

Assessor Mire will take appeals or correction challenges at his office, via e-mail or by phone call to his office.

Assessor Marshall will take appeals or correction challenges at her office, via e-mail or by phone call to her office. Also, she will hold additional office hours on Saturday Aug. 4th and Saturday Aug. 11th from 10 a.m. to 4 p.m.

I do know that the assessors had ample warning and if not then first two weeks of August with the long lines and media attention was surely a wake up call. Yet apparently the assessors did almost nothing to resolve the issues or in most cases to work within the hearing process set up by the City Council. I don't know what went on behind the scenes.

I wonder why the assessors weren't more active in dealing with the taxpayers. The assessors failed to extend their office hours or find alternate places to meet taxpayers (except to some extent for Nancy Marshall ) or even offering water to people waiting in line outside. Something John Georges did for people in Jena.

There is no reason I can think of for the assessors not publicly communicating with the citizens and taxpayers about what could be done to resolve problems. The assessors could have offered to meet with any taxpayer who filed an appeal and try come to an amicable conclusion to be submitted to the hearing officer. The Assessors could have posted additional information on their web site, Some assessors don't even bother to maintain an official web site.

The assessors had from August 20 when the appeals were submitted until November 13, after the hearings were completed and appeals due to the Louisiana Tax Commission to meet with taxpayers and explain the situation or try to reach a settlement. In 85 days that would have required Mr. Williams (the most appealed assessor) and his staff to meet with about 35 people per day.

Let me make this final point. Injustice it where you find it. I found it in my mail box, after two years of trying to get my address changed and several trips to the tone deaf assessors office.

The assessors who issued incorrect assessments in the tens of thousands and refused to meet with us, the voters and tax payers, citing (among other excuses) the need to close City Hall. Assessors who, elected by us, failed to continue to meet with us after the filing date passed to mediate disputes. Assessors who refused to take any affirmative action to discover and correct their own mistakes. All of them contributed to the distrust of the local government in Orleans Parish.

I hear Erroll Williams is planning to run for the single assessor of Orleans Parish in the next election. The rumor is he has brokered a deal to hire all of the former assessors. He can count on my vote for his opponent.
Posted by mominem at 12/09/2007 08:41:00 PM

This is just awful. The ground is shifting under homeowners' feet faster than it ever did under the floodwaters. I'm so sorry y'all are going through this, Mom.

It should have been a series, but I couldn't figure out how to break it up it just kept growing.

I also wanted to include pictures of every assessor, but I couldn't find recent pictures of some of them.