I could write an incendiary post about ghettos and compare them to voluntary concentration camps. I could mention the superficial resemblance to Theresienstadt. 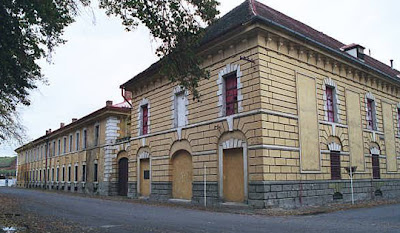 But I also wonder how many public housing residents actually want to return to the old projects? I don't think anybody knows.

HANO says they have hundreds of apartments available with few takers. I've never heard anyone dispute that. The only objection seems to be that some residents feel they have a right to pick any unit they want to, usually the same one they had before.

It seems the housing activists are agitating for a Palestinian like "Right of Return". Even in their language they speak as if Public Housing residents owned these buildings. That in itself is disturbing. C. B. Forgotston has some thoughts on that concept.

Many people in New Orleans have lost their homes, many of those homes were the homes they grew up in. On my block, for example, 4 families are moving, 2 houses have been torn down and 4 houses are under repair. It's a microcosm of the rest of the city. A block away there is an apartment complex sitting vacant and with no repair in sight. Around the corner are 3 unrepaired 4plexes, with some recent repair activity. Where did those people go? Public Housing residents aren't alone. Why should they be treated differently?

Instead some of these activists seem to be in a sort of Revolution Revival Reverie. Observing the forms of the "revolution" without much substance. They seem to resort to slogans and heated rhetoric from a sixties newsreel automatically. Lots of slogans and little justification.

As a sixties survivor, most of that "revolution", except for the Vietnam stuff, now looks to me like little more than a college prank. It was an imitation of the real revolution, the Civil Rights movement, which preceded it. We now seem to be involved in little more than street theater and some meeting room theater, reminiscent of the "Campus Occupations", which were a sort of sixties panty raid.

Everyone seems to have forgotten that these demolitions were coming long before the flood. The flood only hastened them somewhat. Nobody seems to be seriously talking about dealing with the causes and effects of poverty. Nobody seems to be talking about the very real and devastating failures of public housing policy and the hand some of these same activists or their predecessors had in that.
Posted by mominem at 12/11/2007 10:15:00 AM

"HANO says they have hundreds of apartments available with few takers. I've never heard anyone dispute that."

Some activists have disputed that. I think James Perry of the Greater New Orleans Fair Housing Action Center has questioned HANO's claim, and others have questioned whether HANO's list is accurate (i.e., not dated or full of duplicates).

It would seem easy enough to verify, in my opinion, and would be the quickest way to address the crisis, and to show that there are far more families who want public housing than can be currently accomodated. Plus, it would resonate politically, if HANO drug its feet in placing families.

I don't understand why the activists are not pressing this angle of the debate.

It wouldn't surprise me for Perry to have said that.

What I've heard him say and found stops short of that. Most of his comments I've seen say HANO isn't doing enough to contact people and that he doesn't believe HANO when they say nobody wants the vacant apartments.

I also have no doubt HANO's list contains errors and omissions. I'd be very surprised if it didn't. Whether a few or a lot is a valid question.

If HANO's list of vacancies is available it wouldn't be that hard to check.

I agree with you if the activists know people who want to come back why don't they contact HANO and ask for apartment.

Part of what Greater New Orleans Fair Housing Action Center does is "secret shopping" looking for housing discrimination. That woudl seem to qualify.

HANO claims every one of their families has been placed, either in a project in another city or in a voucher program.

They stop short of saying people in other cities don't want to come back.

Let's not overlook the political fact that some of the "housing advocates" are some of the same individuals who profit from being able to deliver large blocks of votes to candidates--for a fee.

I agree with most of what you said. I feel that a lot of community energy is being wasted on the wrong direction.

As for the available units that HUD says they can't fill.. the reason is because they are forced by a court order to ask former residents if they'd like to come back before they can offer the apartment to a new applicant. Many of these people have moved on to other cities, and cannot be found. This is absurd to me. It's not like one can OWN public housing, claim a right to it, or pick and choose how help is given. But that seems to be what the judge upheld. *headdesk*

HANO has said all of their families have housing either here or elsewhere. They couldn't say that if they didn't know where everyone was. Well, they might they're HANO.

Activists disagree but haven't, as far as I know, produced anyone who wants to come back.

HANO can't release their lists residents and the activists haven't produced anyone. It's a kind of Mexican standoff.

I heard Stacy Head say on the radio that the same five or six public housing residents kept coming to the meetings, but I haven't seen them identified or interviewed anywhere, so I don't know what they want.

I can't say I really believe anyone at this point.

Much as astrologers would contend that important things don't happen until certain heavenly bodies all align, here we have a case where factions with completely disparate interests are all "aligning" in an effort to stop demolition of the housing project buildings.

First we have the honest advocates for the poor. While my opinion is that they are misguided in this particular battle in wanting to recreate the concentrations of poverty we had before the storm, these folks are above board in their motives. They can be fairly relied upon to not only be "for" anything that may be seen to benefit the poor but also to be "against" anything that may benefit those who aren't poor, seeing everything rightly or wrongly as "zero sum equations".

We also have the preservationists...another faction with honest intentions. They make no bones about it--the buildings themselves are what they see as worth saving. While I can't say I myself would qualify as a preservationist under the current NOLA parameters (I think there probably are quite a large number of old structures in the city that could be demolished and replaced with absolutely no damage to the city's overall feng shui. Heresy!), we absolutely would be the poorer by now if not for their efforts. I'd argue that despite the purported solid construction of many of the project buildings (I saw a lot of rotted wood when I had a job that put me in the developments everyday back in the late 80s) and their similarity to "Ivy League lecture halls" that these structures are not of especial architectural significance. Of course, there would be arguments from the other side that the significance lie in their simply being home to poor African-Americans for so many years. Which I guess makes quite a large percentage of the rental stock in the city off limits as well.

Another well-meaning (but again, in my opinion misguided) faction are the (to borrow Jeffrey's tag) Yuppie Left. Had this been rolled out as the plan of a Democratic administration there may have been a certain "benefit of the doubt" paid. With it coming instead from the Gang Who Couldn't Shoot Straight (unless there were profits to be made), a conservative regime who've shown to have a remarkably strange idea of just what "compassionate" means, there's no chance the Yups won't be on this like white on rice. It fits the plotline launched while the water was still five feet deep in my den, after all...the evacuations were all a plot to "grab" all of the poor black folks' land and give it to the Evil Developers. And since by definition the poor don't have a voice of their own (demonstrably wrong in the City of New Orleans, where I would contend that the "poor", or their elected or self-appointed representatives, have made the majority of the decisions for at least the two decades just prior to Katrina), the Yups must speak for them. Hell, one or two might even ask for the opinion of the poor themselves before doing the speaking for them.

Lastly you have the vote brokers, the pols who depend on the brokers, and the pigs at the trough who rely on these pols. The pigs need their pols in power to keep the trough full of public funds open and accessible. The pols need the brokers to deliver the votes they need to stay in power. And the brokers need large blocs of potential voters who are reliant on government so they can barter government assistance for votes. And that means large housing projects full of people on the public dole or at least reliant on government supplied housing are like manna from heaven to vote brokers.

You left out the workers in the poverty industry who are public employees and NGO's who make their living off of the poor.

I'm not saying anyone is being intentionally deceitful, but both sides seem to have a significant capacity for seeing what they want to see and not looking too hard at anything else.

Oyster has asked valid questions about why the advocates haven't been more aggressive in identifying actual human beings who want to return. It's very confusing.

I certainly did miss them...but I'd thought of them in the past, if not right when I was writing this. God knows I had enough time while I was writing that to think of a lot of things...LOL.

I'm not quite as generous as you--I think there are parties being intentionally disingenuous, if not deceitful. Maybe not most of the parties, mind you, but some.

I don't discount the possibility that some people are being disingenuous.

I just don't have any evidence against any specific party.